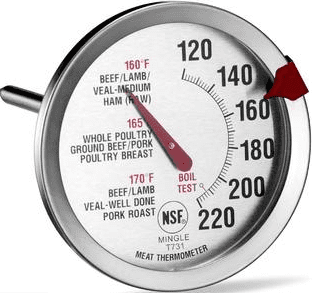 When trying any duck recipe, you may notice that many of the most important steps have to do with temperature. Whether it is checking it to make sure your roast duck is completely cooked, or scoring a breast to allow more heat circulation, you are asked to pay attention to the temperature.

Why is that? Well, in this post, we’ll explain some fun tips about using heat to explain.

This is a common piece of advice for a lot of meat dishes, particularly steak. And since duck and steak have a surprising degree of similarity, the rule of letting its meat rest still applies to it.

Resting the meat is important because the fat and juice of the duck are still cooking inside it. Slicing it straight out of the hot pan, or even removing the meat itself from the pan is going to cause those juices to pretty much spill out and take all the flavour with them.

Thus, it is important to let the meat rest and allow the heat to keep on cooking the meat even after the stove’s turned off. For duck meat, the rule of thumb is generally fifteen minutes of resting.

Another trick you can use is to just cook it cold and then gradually build up the heat. This goes well with cooking duck in its own fat or when rendering it for future use.

The reason why you wouldn’t want to go in hot is because the heat will be too sudden and this makes it harder for the fat to separate from the meat.

This can be very useful to know if you are trying to eat duck meat but looking for ways to reduce its fat content. It is also a good way to learn patience in cooking because it is generally better to let the heat gradually work its way around the duck rather than just blasting one side of it too quickly.

You might have already picked this up when some recipes tell you to score the piece of duck you’ll be grilling.

Because more often than not, this is because the fat may end up buckling and pulling the meat in a lot of weird ways. This is due to the effect of too much heat building up in the fat, but not a lot of space for it to escape. Scoring in the right places gives you more control about how that heat travels!

It only goes to show that controlling heat is definitely a must-have skill for any enthusiastic home cook. Not only does it make you less dependent on thermometers, it also gives you a deeper understanding of heat that you can apply to a host of other dishes (or even when making up your own).